I have discovered that my new home has a bamboo infestation. I’m not sure that is the correct term, but I’m going to go with it. The previous owners seemed to have used the bamboo as a way to screen the backyard from the neighbors.

At first I didn’t know what it was. There was just a line of bushes that screened off a bit of the backyard. It wasn’t until we began cleaning the yard that it really became clear what we were dealing with. It’s only bamboo, right? Pull it up and plant some grass… done.

At least that’s what I convinced myself of. The reality turned out to be something much darker.

Now that spring is in the air and everything is green and alive, the bamboo has spread and now controls about 20% of my half-acre. I have been mowing every weekend since we moved in and am becoming frustrated and a little worried. This stuff is growing faster than I thought possible and seems to be spreading at an increasing rate. I’m not sure what to do.

I did some quick Google research and found a few home remedies such as mowing, digging and white vinegar. I am rather curious about pickled bamboo. For now, I have begun to dig up the clumped roots but everything seems to be connected into some vast labyrinth of living network. I’m seeing a scifi movie in my backyard.

The most drastic solution involves RoundUp weed killer and I am extremely reluctant to go there.

Last weekend we took a long weekend trip to San Francisco. We had this trip planned for some time and refused to cancel it due to COVID. After months of being shut up in St Louis, we needed out. I, at least, get out almost every day, my work schedule has not been affected by the pandemic. I haven’t missed a day. However, I do limit how much time I spend around people, particularly in public areas: fewer trips to the store, limited restaurant exposure, always wearing a mask, etc.

My wife, on the other hand, has been working from home for months and has been taking it rather hard. She is a social butterfly with an innate talk quota that she must meet to maintain general health and sanity.  This trip months ago as a replacement for a family reunion that was canceled. Neither of us had ever been to Frisco and had a long list of things we wanted to do. Alcatraz and the Winchester House and see the Redwoods and ride the streetcars… Basically, San Francisco had been on our list for years. We planned a five-day trip and booked an Airbnb.

But then things started to fall apart. Alcatraz remained closed. The Winchester House was closed. The National and State Parks were closed. And then travel was discouraged. We had reserved and even prepaid for some tours and tickets. What is California without a wine tour, right?!

But regardless of all the roadblocks, we refused to cancel the trip; we needed to get out of St Louis!

Our new plan was to do more hiking than anything else. The National and State Parks were reopened, so we headed to Muir Woods to see the Redwoods. They were INCREDIBLE!! Walking through a grove of thirty-story, perfectly straight trees is a very grounding experience. The stress of the last months melted away to insignificance.

In San Francisco, we focused on the attractions at Pier 39. We went sailing in the bay, into the shadow of Alcatraz, and even went whale watching out into the Pacific. Watching whales jump out an ocean that covers 70% of an entire planet, makes life’s problems seem rather insignificant.

However, COVID was still a concern, and California is considered a hotspot. However, unlike St Louis, 95% of the people around us were wearing masks. I found it encouraging and even comforting to see everyone watching out for each other by simply covering their faces. Rather than focusing on the inconvenience and uncomfortable aspects of wearing a mask, they just jumped on board and did it. I believe that once a majority of people are participating, there is an unconscious peer pressure placed on anyone not participating. San Francisco has reached that level of conformity. And that’s a good thing!

For me, our trip was less about getting away from home or seeing something new than it was about resetting my perspective. I live a rather stress-free life and have built it that way. But I do tend to get hung up on issues around me and tasks I still have to complete. I’m an engineer, so task lists and deadlines are part of the gig. However, in the end, they really don’t matter in the long run. I need to keep that in mind when things start getting to me.

San Francisco was amazing, and we plan to return to hit all the things we were unable to do this time. We rarely return to a place once we’ve hit the major attractions, but Frisco has enough for multiple trips. I look forward to it. 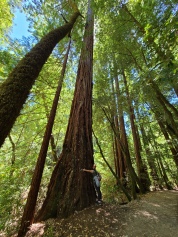 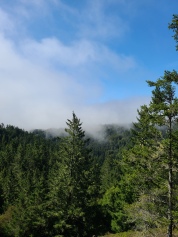 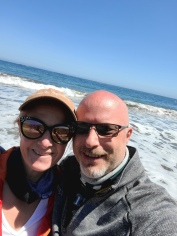 We have a diverse and ever-changing population of wildlife in our neighborhood. Beyond the stray cats and birds, we also regularly see possums and raccoons in our backyard. For the most part they are harmless and haven’t posed a danger to us, so we put food out for whoever wants it. We have no restaurants in the area, so ur trash pickings are rather slim. I believe that a well-fed possum is less hazardous than a starving sickly one.

This is Petunia – Petunia Possum. She appears once in a while, but this was the first time I was able to get her photo. Yes, I am assuming it a girl. It thought it rude to have to ask.

And yes, we name them all.